And Who Are Your Elders?...Why Stories Matter.

Somehow the third course carried into the late hours and the cousins table slowly dispersed into the living room and into bed. I would lay next to my sister and listen to the cups slide into each other and my tias interrupt each other and my father say – otro mas, para que se vayan a dormir – and everyone would laugh and refill cups and Spanish would mix with Quechua creating the background to my dreams. - Excerpt from the upcoming An Amancaya Life


I grew up in a family of storytellers. Both sides of my family told stories, though in very different ways. My mother would keep us enthralled in car rides or while tucking us in bed with stories of her dog Scoutie and the many adventures of her and her brothers with their father in New England. My mother's sister would show me letters from our early ancestors and of the difficulties they faced as the first European pilgrims in North America. My father's stories were always told over food and with his sisters and brother all around the table talking over each other adding details to their stories and making them larger than life. They would tell of the mischief they made in their home back in Bolivia where my grandmother had lots of land. They would tell of the many baskets of fruit and vegetables they harvested, so much so that they often took big baskets to the church, to widows and elders who might be in need. These stories became the backdrop of my life. These stories held the dreams of my elders, their wishes and desires and most importantly, their failures and triumphs, which spoke of the nature of life - filled with injustices and unexpected rewards.

These are the stories of our elders, those who made strides and great efforts before us. Telling our stories keeps us connected to each other and also reminds us of sacrifices made for us by those we didn't even know and oftentimes weren't related to.

The narrative of working hard and getting ahead in life is a powerful one and if we believe that this is all we have to do, then we look around us and make a lot of judgements about those who are not "getting ahead" in life. Thankfully, once again, stories save us from ourselves and these false narratives we tell ourselves and society. Stories tell a fuller truth and our lives become the complex reality of good vs evil all wrapped in one.

And so, it was with great intrigue that I came across some of these stories in this new part of California that I have the blessing to make my home (Resource of African-Americans in Santa Cruz). As my daughter and I and a good friend explored the Museum of Art and History in Santa Cruz, lovingly referred to as the MAH, we came across some unexpected stories that once again reshaped our thinking around this myth of 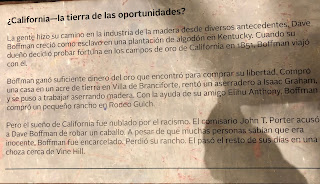 meritocracy. We learned about Dave Boffman who was an enslaved man in Kentucky and who traveled to California with the slaveowner of the plantation he lived on. Boffman was able to earn enough money to buy his freedom, he bought a house, leased a saw mill and began working to mill timber. He even purchased a small ranch in Rodeo Gulch, becoming one of the first African-American land owners in Santa Cruz. The sheriff at the time accused him of stealing a horse. As Blacks were not allowed to testify in court during the 1800s, he lost everything and spent the rest of his life in a shack. Boffman's story contradicts the myth of African-American's not working hard enough and instead demonstrates how systematic racism created conditions of oppression and loss of wealth.

Another elder we learned about was Louden Nelson, also enslaved from North Carolina who came to 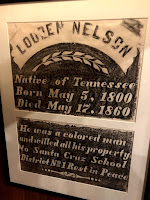 California with the slaveowner. He also was able to buy his freedom and worked in odd jobs while growing fruits and vegetables on his farm. He was also able to buy land by the San Lorenzo River. Nelson noticed how children in Santa Cruz could only go to school when their parents could pay and of course, school was restricted only for white children. Having never been allowed to go to school to receive formal education and being stripped of his ancestral knowledge, Nelson recognized the value of education. Finally, the all white school board shut down public schools unwilling to fund them any longer. Upon his death, Nelson bequeathed his entire estate to the school children of Santa Cruz, therefore allowing public schools to open once again. Another example that demonstrates how the spirit of a people cannot be destroyed, and despite the conditions of oppression that stripped him of the right to an education, Nelson chose a nobler path of serving all students in public education with his endowment.

And finally, we were able to recently connect with some of the elders of the Amah Mutsun Tribe, whose land Santa Cruz was built on.

When I met Catherine, I told her my name.
Ymasumac?, she said.
Yes, I answered.
Like from Pachamama and Mama Occlo.

I had never known anyone to know the names of my ancestors guides, much less upon first meeting
each other. We immediately hugged in sisterhood and spent over an hour connecting over dreams, tears, and stories. We knew our stories were long ago connected through shared ancestry of struggle, resilience and hope and this created an immediate bond. We knew we had long ago met and we were meant to teach each other again of all that was lost. I also knew it is with gentle feet that I need to walk these Santa Cruz mountains because all of it was lost to the Amah Mutsun and that needs to be honored. How do we right these wrongs? Building relationships and friendships is the beginning...and you let love lead.

You see, these stories keep us and our walk sacred. These stories of our elders reminds us of the truth of injustice, of struggle, of loss, of triumph and of victories to come. They keep us humble and keep us moving forward. When we have nothing else, we have stories and they connect us to our elders and to each other.